This UNC team is good; very good. There were stretches of the game against High Point in which UNC could not be stopped. The Heels had four goals on the board, three by Molly Hendrick, before the High Point Panthers even got a shot on goal. UNC dominated the draws, played great defense and did about anything they wanted on the freezing cold night of Friday, February 13th, 2015. 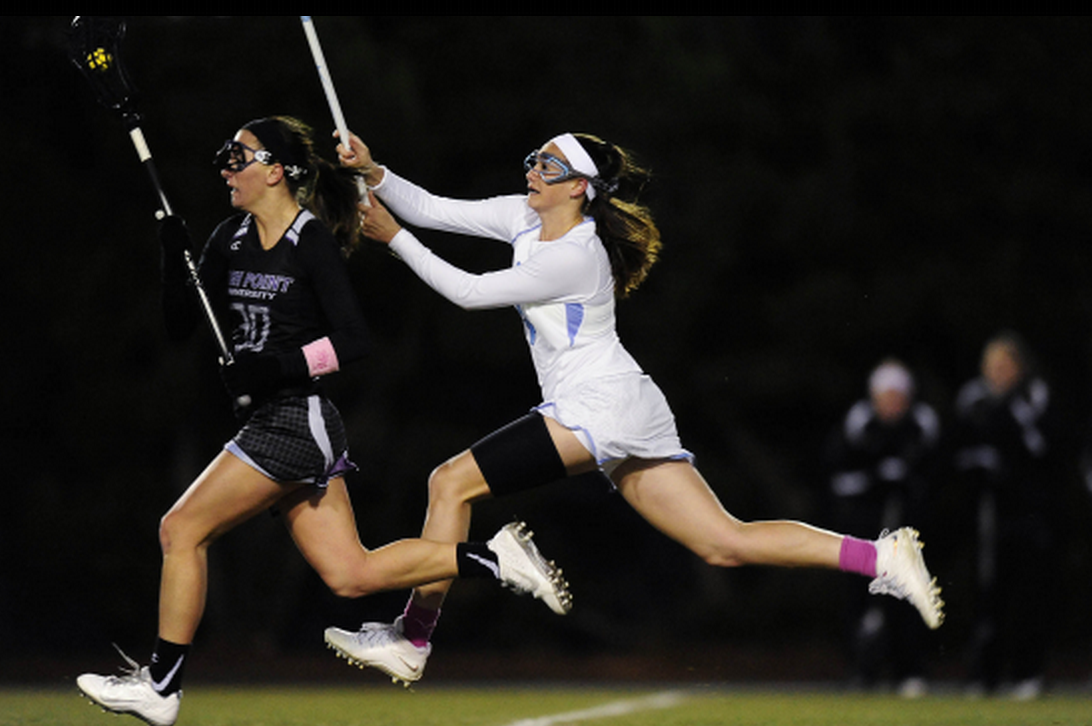 In the blink of an eye, the game was out of control at Fetzer Field on Friday night. The Tar Heels were up 7-1 with 18 minutes left to go in the first half. I was left wondering if the “running clock” was going to start before the end of the half. I was unaware of the rule as I guess the running clock only happens in the second half as the Heels were up 14-2 going into the half and there was no running clock.

The first half was dominated by Molly Hendrick and Brittney Coppa. These two took the majority of the draws and won almost all of them. Coppa took several draws, popped the ball up to herself and started the offensive attack. It was amazing to see this team when they are rolling. In the first half, UNC won 14 draws vs just three won by the High Point Panthers. I am shocked the Panthers won a single draw to be honest.

Molly Hendrick had a hat trick with 23 minutes left to go in the first half. Not even kidding. She scored three of the first four goals for the Heels and they were off to the races. Other scores in the first half included Coppa, Messinger, Tracy, Bill, Holman, Hazer and Devlin. Not to be left out, Alex Moore opened up the second half scoring to put the Heels up 15-2.

Marie McCool, Sam McGee, Carly Reed and Carolyn Paletta also scored in the second half. When all was said and done 13 different Carolina players scored. I don’t think I have ever seen this in a college game.

One concern for the Heels was Molly Hendrick going down to injury. With about 12 or 13 minutes left to go in the game Hendrick went down screaming in pain behind the High Point goal. A team that lost six athletes to ACL or leg injuries last year does not want to see this out of one of their stars. Fortunately, Hendrick got up and walked off the field with a slight limp. This will be an important development going into the Maryland game next weekend.

Another interesting note was I finally saw a player that was faster than Maggie Bill. Erica Perrotta, a freshman, showed some amazing speed in the midfield and on defense against the Heels. In two years, I never saw anyone “run down” Bill in the midfield but Perrotta did it a few times on Friday night. She really is a little fireball when it comes to harassing the attackers of the opposing team. She is a player I would like to see more of moving forward.

Speaking of sprinting, we got to see Courtney Waite sprint the length of the field a few times on Friday night. This is the easiest way for any team to clear – have your fastest player just sprint out of trouble. Unfortunately, she will not be able to do that against the Maryland Terps next weekend. Clearing will be a major concern for the Heels as the Terps continue to pressure even after they lose possession on the offensive end.

Turnovers and Clears Important for UNC vs Maryland