At the beginning of the 2014 season Sammy Jo Tracy tried to give it a go. As tough as she is, her ankle/foot could not hold up. She ended up having surgery and missing basically the entire season. She did play in a few games early so I am not certain if she received a medical redshirt. If you know, please feel free to comment below. What we do know is that Tracy will be back in 2015 ready to help led the Tar Heels to a Final Four. 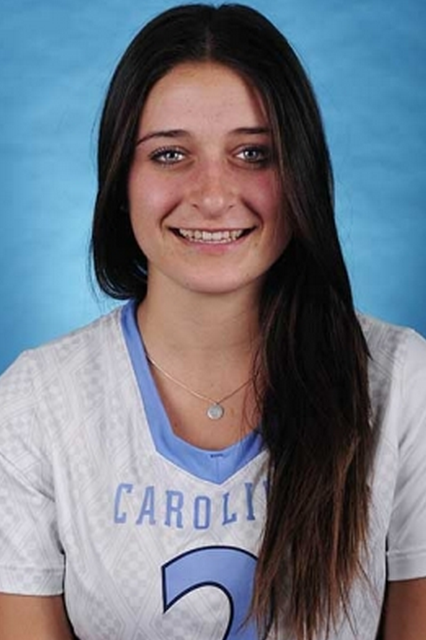 In the 2013 national championship season, Sammy Jo Tracy was a freshman that played a key role in the championship run. Throughout much of the regular season Tracy took the draws. As she has admitted many times, she truly does play like a boy. I have never see a women’s lacrosse athlete throw her body around in the way that Sammy Jo Tracy does. If there is a ball on the ground she will do everything in her power to get possession.

She showed some tremendous stick skills in the midfield in 2013. There was one particular play in which Tracy was knocked down while maintaining position and cradling the ball. She got back up and made her way to the offensive side of the field. It was quite the sight to see.

In 2015, we can only hope that Tracy comes back 100% healthy. Brittney Coppa and Sammy Jo Tracy were starters in the midfield, along with Kara Cannizzaro on the 2013 team. Both Coppa and Tracy are back for this season. In their absence, Molly Hendrick and Maggie Bill got a lot of experience last year. In fact, Hendrick and Bill started almost every single game for the Tar Heels.

That begs the question, “Who will start in the midfield for UNC in 2015?” This is a very interesting question as there is a ton of talent on this team. Along with the returning Coppa and Tracy are Hendrick and Bill that made many All Freshman team lists last year. Add senior Lindsay Scott, transfer Alex Moore and freshman Marie McCool and you have a group that could be the best in the country. This list does not include Carly Davis who finished 2014 on a tear.

Jenny Levy has her work cut out for her when it comes to putting her three best midfielders on the field to start the game. In all reality, the three best midfielders will change each and every game. Finding the players that mesh the best in real game conditions will be quite the challenge. The Tar Heels do not get much time to get their footing as they head to Gainesville to take on the #3 Florida Gators in the second game of the season. The fourth game of the season will be in College Park where the Tar Heels will take on the defending national champion Maryland Terrapins.

We will quickly learn what this UNC team has to offer. I do not have delusions of grandeur in thinking the Tar Heels will go undefeated. Their schedule is brutal. I honestly cannot remember a schedule in which such a highly ranked team has to travel so much. The Heels will make trips to South Bend, Towson for a weekend, Blacksburg and Louisville along with the trips to Gainesville and College Park.

I think it is safe to say the Tar Heels will be tested when they enter the ACC Tournament in Charlottesville this spring. Did I mention the University of Virginia Cavaliers ended the Tar Heels season last year? If the Heels are going to win the ACC and make a run at the Final Four I think Sammy Jo Tracy will play a very important role. She won’t have huge stats in terms of goals but she will make her presence known in the midfield by throwing her body around, causing turnovers and gaining possessions. I will be glad to see her back on the field.