In 2014 one name came out of nowhere for the UNC Tar Heels. In the #1 recruiting class in the country most thought Maggie Bill (#2), Carly Reed (#3), Sydney Holman (#4) or Maggie Auslander (#6) would be the star (recruiting rankings). Almost no one knew the name Molly Hendrick as she was not listed as honorable mention on any recruiting list. Molly Hendrick was definitely the sleeper of the class. 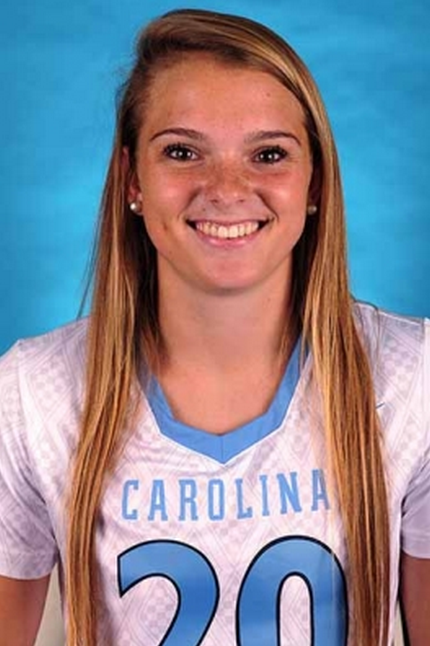 When Brittney Coppa and Sammy Jo Tracy went down to season ending injuries Molly Hendrick stepped in and took advantage of her opportunity. Below is a video showing how aggressive Hendrick plays:

Being 5’8″ and quite strong Hendrick throws her body around when going after ground balls. She took most of the draw controls during the season; especially as the 2014 season progressed. As the competition stiffened Hendrick had trouble winning draws. The main reasons the Tar Heels lost five of their last nine games was because of draw controls. In the game against UVA to go to the Final Four the Heels went several straight draws without touching the ball. This was the reason they were upset by the Cavaliers at Fetzer Field.

Hendrick will be wearing #23 this year instead of #20. Taylor George wore #23 last year and she graduated from UNC. With a new number and plenty of competition at midfield it will be interesting to see how Hendrick moves forward in her career. I believe Sammy Jo Tracy and Brittney Coppa will take most of the draws this year. This may push Hendrick to the second midfield line which would mean much less playing time. This can be an extremely tough pill to swallow for most college athletes.

After being named to the 2014 All Freshman team Hendrick has the potential to be an intergral part of a team that will make a run at the 2015 National Championship. In my opinion, the best midfield line for the Tar Heels will be Coppa, Bill and Sammy Jo Tracy taking the draw. The second best line would like be Hendrick, Marie McCool and Alex Moore. Insert Sarah Scott, Kelly Devlin, Devin Markison, Bridget Curran, Carly Davis or Maggie Auslander to any of these lines and you would not see much of a drop off.

Kara Cannizzaro on the 2015 Tar Heels