When Mallory Frysinger was slated as a defensive starter in her first game as a UNC Tar Heel it came as a surprise to some. Frysinger was not one of the top recruits in the 2012 class and the Tar Heels had several All Conference players on the back end. In her first two years in Chapel Hill, Frysinger learned a lot from Sloane Serpe, Caileigh Sindall and Margaret Corzel. In 2015, armed with this knowledge and experience, Frysinger will be one of the upperclassmen that is expected to lead the defense. 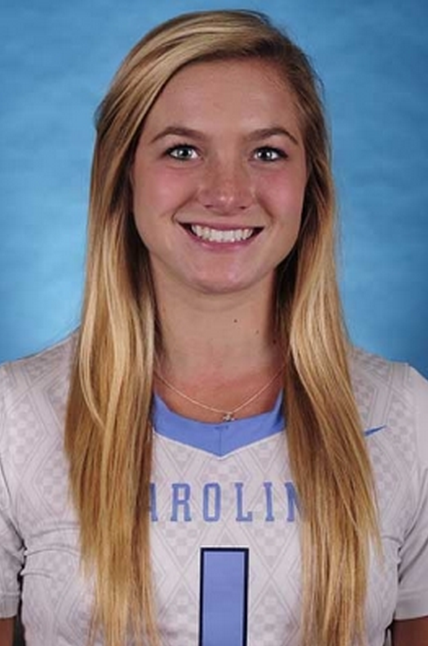 Sloane Serpe graduated after an All American season so the Tar Heels will be looking for the next defensive All American. While most have given that honor to Margaret Corzel I think Mallory Frysinger could be just as good, if not better. Now that Frysinger has two years of experience under her belt I would expect her to have her best year yet in 2015.

Something that was different for Frysinger in 2014 was playing in the midfield when UNC struggled to control the draw. Jenny Levy knows her players better than anyone and it is obviously the case that Frysinger is one of her best players to retrieve ground balls when UNC needs a possession. With a loaded midfield in 2015 I don’t think we will see Frysinger anywhere but the defensive end very much.

We will see Frysinger alongside Margaret Corzel, Caileigh Sindall and Courtney Waite this year. I think this is the best defense in the country, besides the Maryland Terps. I give the Terps the edge because they return all of their starters and they gave up under 9 goals a game, on average, last year. This UNC team will not give up only nine goals a game. They do not play that style lacrosse. It is a very fast paced lacrosse and some teams are going to score 12 or 13 goals because the Tar Heel will have 21 or 22 goals.

In the second game of the season we will learn a lot about this UNC defense. The University of Florida is the preseason #3 team in the country and the Heels will make the trip to Gainesville on February 7th. When the Gators came to Chapel Hill last year the Tar Heels dominated to the tune of 20-8. Shannon Gilroy is a preseason All American for the Gators and she will pose a threat to the UNC defense. I look for Frysinger to be the one that is asked to stop Gilroy in this particular game.

The success of the 2015 UNC Tar Heels will likely be determined by the play of the uppeclassmen of the defense. If seniors Corzel, Waite and Sindall and junior Frysinger can play up to their ability there is no reason this Tar Heel team cannot return to the national championship game on Memorial Day weekend. The fourth game of the season is at College Park to take on the defending national champions. Two of the first four games at Florida and at Maryland will tell us a lot about this UNC women’s lacrosse team.