After watching the scrimmage versus Elon it is quite obvious that #14 Ela Hazer will get significant playing time for the Tar Heels in 2015. Although I don’t think she got on the scoreboard she was a factor attacking the goal. Last year she was rated as one of the top 20 high school players and in 2015 she will be asked to step up her game to help the Tar Heels make a run at the 2015 ACC and National Championship. 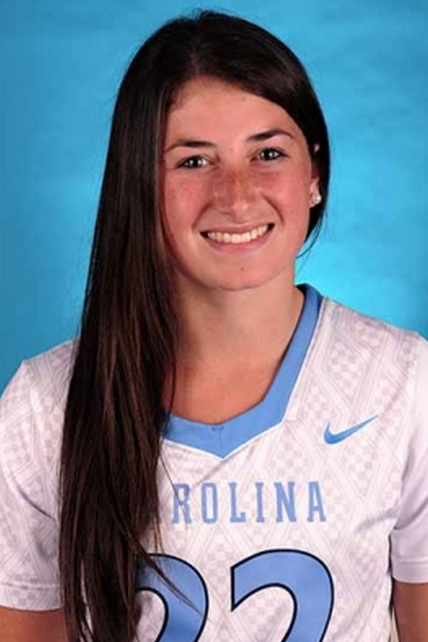 In a very stacked UNC midfield Ela Hazer is going to be a player that will likely have to earn her playing time. Brittney Coppa, Sammy Jo Tracy, Molly Hendrick and Maggie Bill have proven to be great college players which will push Hazer to be an even better athlete. From the little bit I got to watch her in the Elon scrimmage I can say that she has great stick skills and goes after the ball hard. This is going to be a common theme with this UNC Tar Heel team that lost to five of their final nine games last year due to lack of aggression.

I cannot say that Ela Hazer’s game reminds me of anyone on the team that played prior to this year. Interestingly, Bridget Curran, Marie McCool and Hazer seem to have games that reflect each other. UNC doesn’t need a ton of offensive help from the freshman class but it looks as if this class if going to give it to them.

As we progress through the season it will be fun to watch the development of the three Under Armour High School All Americans that will be freshman on a very talented UNC team.

Tar Heels Dominate Second Half of the Elon Scrimmage