Carly Reed was a beast in high school. She scored 131 goals. In one season! In her high school career she scored 475 goals which is absolutely ridiculous. Some high school players don’t rack up that many minutes played. She is ranked second all time for the number of goals scored in a high school career; only behind Tewaaraton Award winner Shannon Smith from Northwestern University. In her sophomore season, much more will be asked of #11 Carly Reed. 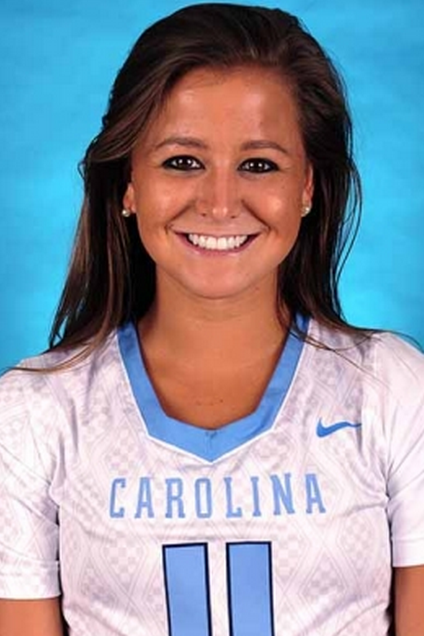 During her freshman year, Carly Reed showed signs of brilliance. Interestingly, Reed was not in the starting lineup very much as she was substituted in after UNC controlled the draw or gained possession. Coach Jenny Levy had a very interesting way of getting her best goal scorers on the field. In a round about way, Lindsay Scott, Carly Reed and Caileigh Sindall would rotate in and out depending on which team had possession.

With Reed being such a prolific goal scorer it made sense to have her on the field when UNC had the possession. As the season wore on it seemed as if Reed was not getting as much playing time. I do not know if this was due to strategy or was a decision by the coach. We will leave that to be decided by those within the program. Reed did have significant playing time in the NCAA Tournament in which she scored five goals. In the season ending loss to UVA, Reed had three goals.

An interesting note is that former high school teammate Paige Patterson, that also went to St. Stephens & St. Agnes School in Alexandria, is not with the UNC team in 2015. Patterson was a highly touted, Under Armour, All American recruit out of high school that never saw significant playing time while in Chapel Hill. I can only hope that Reed becomes a more integral part of the lacrosse program than Patterson. I can only hope Patterson landed on her feet and is continuing to pursue her education while playing the sport of lacrosse.

We saw the true potential of Carly Reed in the game against Notre Dame. She scored a season high five goals and added an assist for six total points. She was unstoppable against a top 10 team (at the time). The Notre Dame game was the peak of the 2013 UNC Tar Heel season. At that point of the season the Heels were scoring at will and they had not been tested.

The Tar Heels will start the season in a much different way in 2014. Instead of starting with eight of nine games in Chapel Hill the Heels will travel to Gainesville and College Park to play two top three teams in their first four games. This is going to be quite the challenge but it should prepare the team for a strong run in both the ACC Tournament and the NCAA Tournament. If the Heels are going to return to the Final Four, Reed will need to be one of the top scorers on the team.

The two shoe ins to start at attack are Aly Messinger and Sydney Holman. Reed definitely has the talent to take one of the other two spots. The line I would like to see is Messinger, Holman, Reed and Moore/McCool. We will see what Jenny Levy throws at defenses starting February 1st.