In 2014, Brittney Coppa was slated as one of the top women’s lacrosse players in the country. She had come off a great junior season in which her Tar Heels had won the national championship for the first time. Along with Sloane Serpe and Abbey Friend, Coppa was going to be the senior leader for the 2014 Tar Heels team that was preseason #1. Unfortunately, tragedy happened. While scrimmaging the US National Team Coppa tore her ACL. She went down screaming in pain and anyone watching knew that her season was over as soon as the injury occurred. 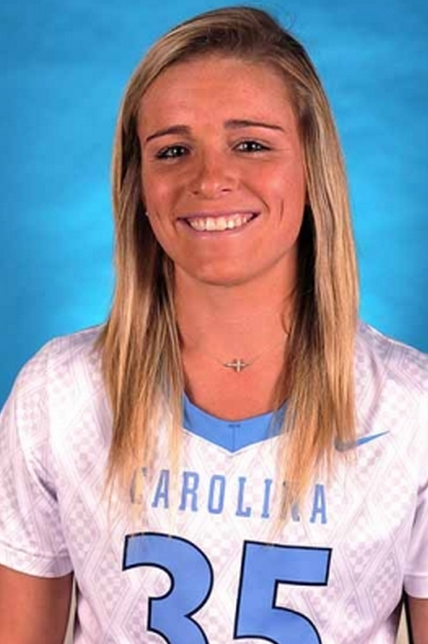 Flash forward 11 months and Coppa has recovered and is ready to lead the Tar Heels in her senior season. She received a medical redshirt last year and will be eligible to conclude her career at UNC along with fellow senior Margaret Corzel who went through the same injury three years ago. Both girls are in their fifth year of the program so they should be able to easily lead this squad of young talent.

As I mentioned in the Marie McCool 2015 season outlook, the UNC midfield is loaded. Both Coppa and Sammy Jo Tracy are back after season ending injuries in 2014. While watching from the sidelines, Coppa and Tracy got to see the emergence of Maggie Bill and Molly Hendrick during their freshman year. This means Bill, Hendrick, Tracy and Coppa have all started in the midfield in the last two years. Add to that ground ball extraordinaire Sarah Scott (a senior this year) and you have five players that have been in the starting lineup in the midfield for the Tar Heels in 2013 or 2014 that are on the 2015 squad.

While this may seem like a problem, it is only the tip of the iceberg. Jenny Levy signed another great class in 2014 as high school All Americans Bridget Curran and Marie McCool will join the team as midfielders. The icing on the cake is USC (Southern California) transfer Alex Moore will be wearing Carolina blue this spring as well. While these three athletes have tremendous potential, they have yet to play an official game while wearing a UNC jersey. For this reason, I would have to guess they will not be starting at Fetzer Field in the spring of 2015. That said, most did not think Maggie Bill and Molly Hendrick would start in their first year in Chapel Hill either.

One thing is certain, if healthy, Brittney Coppa will be starting in the midfield for the 2015 Tar Heels. On the 2013 national championship team she was often the second best player on the field behind Kara Cannizzaro. Now that Cannizzaro is two years removed from the program and last year’s leading scorer Abbey Friend has graduated the Tar Heels will look to Coppa for leadership.

Another major advantage for Coppa is not only her age and experience but her size. She is 5’8″ and extremely strong in the midfield. Tall and lanky is not how I would describe Coppa. She definitely has the strength to power through double teams and get shots off in tough situations. Turnovers should not be a problem for Coppa as her size will allow her to fend off those trying to create ground balls.

Last year, Coppa was on the sidelines for all 20 games. It was obvious that she developed a strong relationship with Maggie Bill and Molly Hendrick. Freshman Carly Reed and Sydney Holman also received valuable leadership and advice from the senior. Now that Coppa will be on the field for leadership in 2015 it will be interesting to see how she reacts. I feel as if watching from the sidelines for a year will be extremely valuable for Coppa. She will better understand her teammates and how to react in certain situations.

One concern I have for Coppa is being the aggressive player she was after having knee surgery. Both Coppa and Tracy were some of the most aggressive midfielders in the game of lacrosse during their 2013 championship run. Heck, Tracy will tell you flat out that she plays like a boy. After both of these young women having surgery will it be the case that they go aggressively after those ground balls? Will they throw their body into the mix when there is a scramble? These are questions that cannot be answered until they play in their first game on February 1st vs James Madison.

I honestly believe Coppa will return and lead this team to the national championship game. The regular season will not be pretty with the Tar Heels going to Gainesville, College Park, South Bend and Durham. These tough road games will prepare the team for a run to the Final Four and the national championship game. The only concern is, can they beat the Maryland Terrapins?