The first game for the Tar Heels was not the best performance but they got the win. In the first half the Tar Heels struggled to connect on passes that are usually not even a second thought. Turnovers and ground balls plagued the Heels as they went into halftime only leading 6-5. Early in the second half James Madison actually took the lead briefly. When the Tar Heels needed a goal Alex Moore was the one that stepped forward. She scored two man down goals that put the Heels on top mid way through the second half.

Moore added another late in the second half and the Tar Heels ended up finishing the game with a 13-9 victory. During the last five minutes the Heels did not do much offensively as they were just trying to bleed the clock and get out with a win. 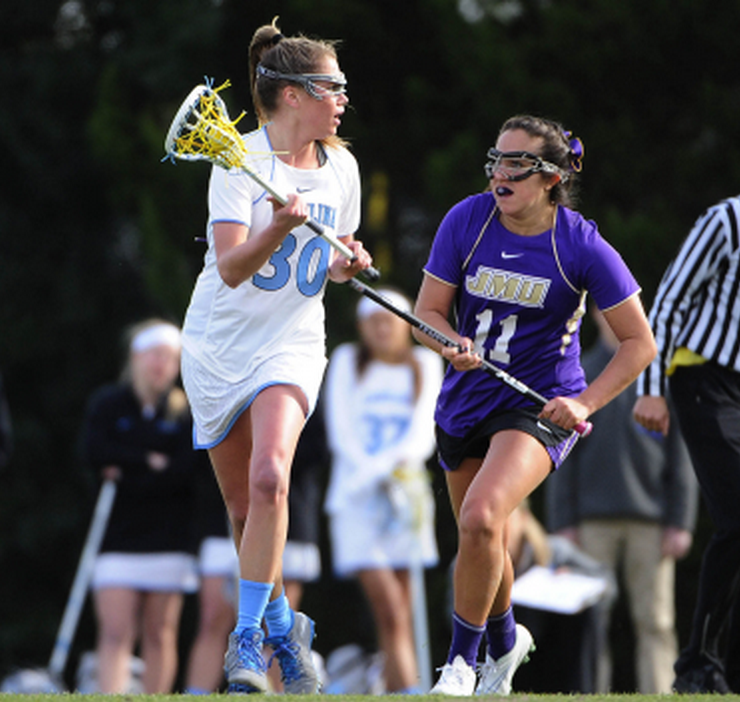 Here are some of the stats:

The Tar Heels were also two for two when it came to killing off penalties or being a man down. That said, the Dukes had a free position goal as soon as one of the penalties was killed. In the books, the Tar Heels will be 100% in penalty kills. The Heels were also 100% when playing a man up. The Heels got two of their goals when a Duke player was awarded a yellow card.

Noticeably absent from the goal sheet are Sydney Holman and Carly Reed. Both players were very active on the offensive end but did not record a goal. Both had at least one assist and helped to lead the attack in the second half when the Tar Heels needed it most. Freshman Marie McCool and Ela Hazer both recorded their first goals as a Tar Heel. Hazer had, at least, four shots on goal and could have easily ended up with a much more impressive day when it came down to stats.

An interesting development in the second half was Sammy Jo Tracy not being on the field. She had to sit out almost all of 2014 with an ankle injury. I noticed she had braces on both ankles when she was playing in the first half. Ela Hazer and Carly Reed played in the absence of Sammy Jo Tracy in the second half. I am not certain if this was just a strategic decision or if Tracy has injury concerns.

As we move forward in the 2015 season the Tar Heels must work on turnovers and ground balls. Time and again the Tar Heels would be running down field with the ball and just drop it. This is something you almost never see from a Tar Heel team. They were also struggling to convert passes on the offensive end in the first half and at the beginning of the second half. I would like to think they will clean this up before heading to Gainesville next Saturday.

Another concern, for me, is the lack of a true draw control specialist. Both Molly Hendrick and Brittney Coppa are using the “draw control” stick for the Tar Heels but they are not nearly as efficient as Taylor Cummings at Maryland. Heck, Cummings can win an entire game by herself by simply controlling the draws. I hope we see Hendrick and Coppa start to win more draws so the Heels can get more possessions in a 60 minute game.

On the defensive side of the ball we did not see Courtney Waite the entire game; I am not sure why.